UNHCR celebrated the World Refugee Day in Tunis with a photo exhibition about the Choucha Camp. Refugees from Choucha entered the festivities with banners demanding to get protection as refugees instead of being forced to stay in Tunisia. One of the spokespersons even got the possibility to hold a speech through the microphone and make clear what their demands are.
Mehdi Mabrouk, the Tunisian minister of culture, started a debate with some of the Tunisian supporters of the refugees. In his opinion, he had been invited to celebrate the World Refugee Day and not in order to solve any problems of refugees. He then left the exhibition. Supporters were arguing that it is cynical to celebrate a World Refugee Day while the refugees you are taking pictures from are sleeping in the streets. The Sit-In in front of the UNHCR offices in Tunis continues, there has been no solution found to the demands of the refugees.

We received news from Choucha Camp, about the difficult situation that the refugees and asylum seekers are living in. There are now about 600 to 700 people left in the Camp. These are refugees waiting for their departure to the USA, refugees that are refusing their local integration and asylum seekers with rejected asylum status. From thursday, 06.06., until saturday, 08.06., the water and electricity in the Camp were completely turned off. Earlier there was already the washing water that was turned off. Now, the drinking water is back, but its not enough, the cues are long to get water.
In addition, UNHCR is announcing that from the end of June, there will be no services at all in the Camp, not even a medical service. Refugees and asylum seekers that are refusing to leave the Camp will be left back in unbelievable hard conditions.
As we reportded earlier, the group of Eritrean refugees, that came by boat in autumn 2012 and
were hosted in Medenine, went to the Camp a few weeks ago, refusing the
local integration. They have since not gotten any money or food from
UNHCR. Thus the situation is extremely hard for them at the moment, trying to survive with families and children.

Posted in General | Comments Off on Current situation in Choucha

Report on the rejected Asylum Seekers of Choucha Refugee Camp

The Fahamu Refugee Legal Aid Newsletter recently published a report of the Centre de Tunis pour la Migration et l’Asile. This gives a complete picture of the situation of the rejected asylum seekers and the failures in the Refugee Status Determination process carried out by UNHCR. See this report here.

On monday, May 27th, the refugees who are submitted to be resettled to the USA, made a demonstration in front of the UNHCR office in Choucha Camp. The UNHCR had decided to move them out of the camp to Tunisian city, where they should wait until their departure. But due to the persecution that they will find in these cities, they decided to stay in the camp and protest, announcing their rejection to this decision. This protest once again is a proof for the difficult situation, that refugees would find themselves in, if they were locally integrated in Tunisia. 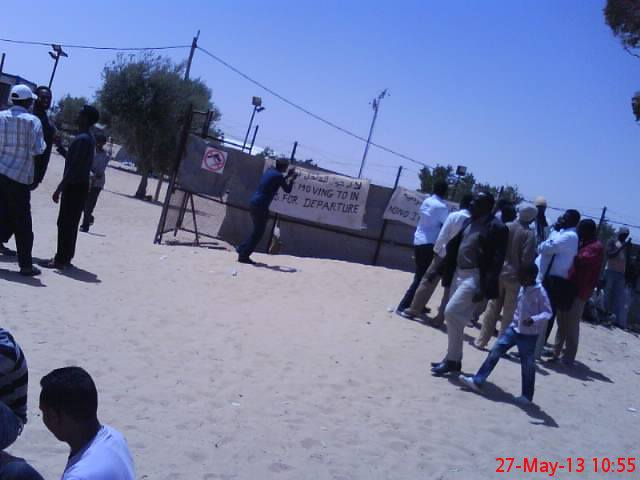 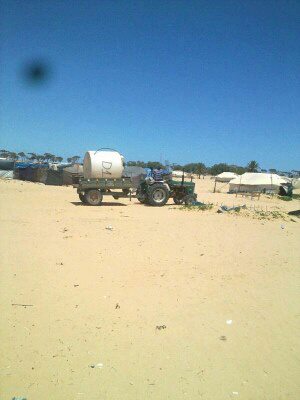 Since May 23rd the drinking water is again cut in Choucha Camp. Drinking water as the most basic need of human beings must urgently be provided to the refugees at all time in the camp. We understand this act as an attempt to force the remaining refugees and rejected asylum seekers out of the camp. We deeply condem this act as it is seriously threating the lives of hundreds of remaining persons. Refugees have also reported that those waiting for their Resettlement to the USA were asked to be hosted in other cities until their departure. They refused leaving the camp, supporting like this the remaining refugees that are not willing to engage in the local integration nor to leave the camp voluntarily before a solution to their situation is found.

In addition to this, refugees have been threatened by the local population in Ben Guerdan, when they went there to buy necessities or trying to find small jobs. They had to jump into taxis and return to the camp, fearing that they might be beaten up by the crowd. As the services in the Camp are being cut down, refugees and asylum seekers need to go to the city, but feel closed in in the camp following the recent incidents in Ben Guerdan.

Posted in General | Comments Off on Situation in Choucha

Minister of Social Affairs in the Camp

On Monday the Advisor of the Minister of Social Affairs visited the Camp. He explained, that the rejected cases as well as the refugees that are left without resettlement, should get fingerprinted. He also clarified, that the responsabilities for the two groups are differently, as the UNHCR is responsable for the accepted refugees and the rejected are supposedly without anyone responsable for them.
This was a preparation visit for the visit of the Minister of Social Affairs, Khalil Zawi, itself, who came to the camp on yesterdays Tuesday.
To this event the refugees of Choucha Camp hold a protest. With several banners they were protesting against local integration and the fingerprinting. 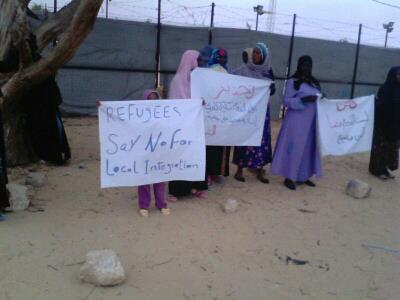 We can only guess for which pupose the fingerprinting of the remaining refugees should serve. If some of them reach Europe by the Mediterranean, these fingerprints might be useful for the European countries to deport the persons back to Tunisia. The fact, that the fingerprinting is now carried out by the Tunisian government, might be a hint to the collaboration between the Tunisian government and the European Union.
Instead of already calculating witht he refugees and rejected asylum seekers crossing the Mediterranean, the authorities should instead create durable solutions for these persons!

Attempt of expulsion from Choucha

On Thursday, May 2nd 2013, the camp management tried to push recognized refugees out of the camp.

As you can read in the blog post from 22.04., there was a group of 34 Eritreans, that arrived in September 2012 by sea. They started the program of local integration immediately and were settled in Mednine. But on April 17th 2013, they decided to leave Mednine, refusing this program. Instead they found shelter in Choucha and are since then living there. As they are refugees, they are under the protection of UNHCR, and thus demand protection in Choucha Camp and a durable solution for their future. On May 2nd, the camp management together with staff from UNHCR, Tunisian Red Crescent and soldiers, came to the Eritreans in Choucha and demanded their tents. They tried to force them to leave the camp. But the refugees could resist, blocking the tractor that was supposed to take the tents. Until now, no further attempts to push out the refugees have occurred.
Refugees should not be forced out of the camp, instead there should be a durable solution found to their lives!

Posted in General | Comments Off on Attempt of expulsion from Choucha

Last Wednesday, a three year old girl, that participates with her family in the sit-in outside the UNHCR office, was hit by a car. Luckily, she only took away some bruises. UNHCRs reaction to this incident was today, that they told the refugees to take the children away, or otherwise UNHCR would call the police. Instead of the establishment of a dialogue as a reaction to the hunger strike, that is taking place since one months already in front of their doorstep, UNHCR is now threatening the refugees to tear apart families. Protecting refugees should be carried out in a different way: Giving the refugees a chance to build up a normal life, free of discrimination!

Posted in General | Comments Off on UNHCRs reaction to accident

No Resettlement – Few and Dangerous Options

A few days ago five Somalian underaged Refugees left to Libya. As they are not allowed to the resettlement programme, although they are accepted as refugees, they don’t see any chance of a future in Tunisia.
This is why they decided to leave to Libya and take boats to reach Europe. The programme of local integration is partly responsible for the risk of these young lives. If UNHCR and the countries of the EU don’t resume their responsibility for the group of refugees that is left behind in Tunisia, more people will try to reach a safe country by boat.

In the same time, the UNHCR is concretizing it’s idea of the local integration programm. Completely ignoring the hungerstrike, which is lasting for almost a month already, and which is weakening the protesters more and more. Instead UNHCR is spreading information on leaflets, stating that they keep on planning to locally „integrate“ the Protesters in southern towns like Medenine. The same places in which parts of the protesters already experienced harsh discrimination and exploitation. On the leaflets they are explaining all the services, that they are planning to offer to the refugees. Leaving important issues open, as the question of a legal status in Tunisia or the possibilty to reunite families.

UNHCR and EU governments need to focus on the demand of Ressettlement for the remaining Refugees from Choucha, otherwise a humanitarian catastrophy is about to take place in northern Africa, as the hungerstrike and the news of individuals leaving by boat to Italy indicate.

After UNHCR cut down even the water and electricity supply in Choucha camp in early April – as you could read on VOICE OF CHOUCHA blog – the Refugees together with FTDES put pressure on UNHCR by protesting and
publishing critical reports.
Now, a few weeks later, the UNHCR declared in a letter, that the water supply will be intact again.
Still the rejected Refugees live without any food and medical attention in Choucha camp, psychologically stressed through the situation in which UNHCR does not offer any solutions for them.

Posted in General | Comments Off on Refugees Protest and FTDES Report: first signs of success