About 100 rejected asylum seekers from the refugee camp in Choucha are currently protesting in the Tunisian capital. 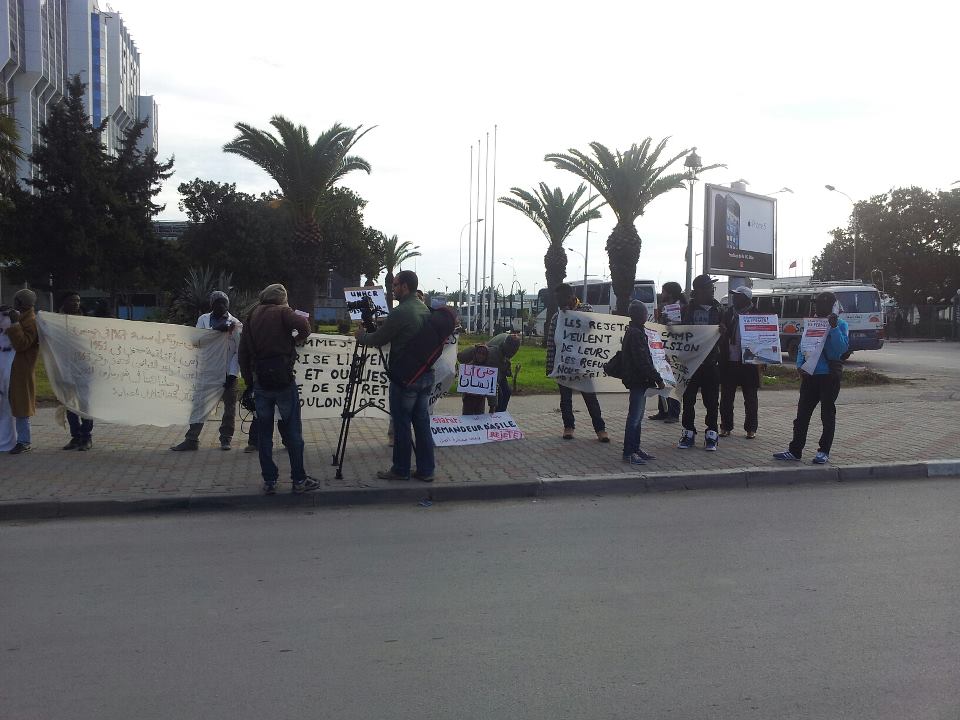 About 100 refugees from the refugee camp in Choucha, which lies on the border between Tunisia and Libya, reached Tunis on Monday 28th January in order to stage a protest that will continue for several days. They had no choice but to live in the desert for two years while the UNHCR negligently worked on their cases, and eventually rejected them as refugees. Since October 2012 they have been denied access to food and medical care. Now the protesters have taken the necessary steps to challenge their isolation and the consequent lack of prospects.

The camp in Choucha was established during the Libyan civil war during winter 2011. It offered refugees the opportunity to access an asylum procedure and to travel on to participating states in the framework of the resettlement programme. Over the past two years, daily life in the refugee camp hasn’t had much to offer apart from unbearable periods of waiting while putting up with the heat and sandstorms. This particularly affected refugees who were not recognised as such by the UNHCR.

The camp has to be seen as a part of the externalisation politics of the European Union – it prevented hundreds of people from challenging the EU’s border regime by trying to enter its territory, by embarking on a boat. At the same time, granting access to a limited number of refugees allowed the media to paint a different picture, diverting public attention away from a militarised campaign against migrants. Germany (pop. 82 million) demonstrated its extraordinary generosity by accepting 205 refugees, whereas Tunisia (pop. 10 Mio.) welcomed half a million people during the Libya-crisis. However, only people who hold a refugee certificate are granted access to the resettlement programme. Many of those who the UNHCR did not recognise as refugees have already traveled back to their countries of origin. 230 of them are still in Choucha. They accuse the UNHCR of severe mistakes and negligence in processing their demands for asylum. These errors range from biased and incompetent interpreters, misspelled names of places and families to the cooperation with the government bodies that refugees fled from in the first place.

The ensuing exclusion and lack of perspectives of this group of about 230 people led to various protests last year and to the most recent demand for an independent review of the rejected cases. In order to make their voices heard, 100 of them traveled to Tunis.

No one is illegal – not even in Tunisia

The journey to Tunis represents an act of resistance in itself. Because they have been rejected by the UNHCR, the group of 230 refugees are now considered “illegal migrants” by the governent and are not allowed to move freely. That is why they may be arrested, detained and deported at any time if the Tunisian state decides to. Until now the illegalised protesters have only been detained for short periods of time and sent back to Choucha after having been told that the UNHCR is reponsible for them. In this passing on of responsibilities the UNHCR’s most recent course of action is remarkable. Since October 2012 rejected asylum seekers are being denied access to food and medical care. This scandalous and merciless strategy of a reputable humanitarian organisation evidently aims at forcing people to leave.

The refugees keep emphasising that because of persecution and/or war, they cannot return to their home countries – which the UNHCR would have been able to ascertain if it had adequately reviewed their cases. They decisively reject the UNHCR’s cynical suggestion to just go back to Libya1.
This is why two central demands of the current protest are for the UNHCR to resume the supply of food and medicine to the refugee camp, and to allow access to the resettlement programme for everybody who remained in Chocha. The latter demand is also directed at the European Union and all NATO states that caused the current situation by intervening in the civil war in Libya.

To reinforce these demands to the UNHCR and the EU, and to make them accesible to the Tunisian and the international public, the Chocha refugees will stage a protest for several days in Tunis. In order to achieve this, they need support! Please:

* Sign the open letter adressed to Ursula Aboubacar, the head of the Tunisian UNHCR, containing the demands of the protesters!

* Participate in the fax campaign and send a fax (english, francais,deutsch) to UNHCR offices in your country, to the Tunisian Representatives and to their headquarters in Geneva.

* Donate money for food, transport and means of telecommunication for the protesters. Transfers can be made to this bank account:

* Organise solidarity actions – in front of UNHCR offices all over the world!

Further information you will find at:

1 Libya still does not offer security – black people in particular are constantly threatened by arbitrary arrests and racist violence. Many refugees in Choucha were told about such experiences by people who did return to Libya.